My son is 13 months old and is about to experience his first proper Christmas – let’s face it, last year was just eating, sleeping and pooping but with prettier lights. Santa has already been busy buying him presents and getting him things that my partner and I think he wants or, even worse, things we think he needs. He’s the youngest of 4 and his half brothers and sister have provided plenty of hand me downs over the past year or so but Jake (let’s call him that, because that’s his name) has a very definite idea of what he wants in this world so I thought I’d transcribe his real Christmas wish list for him.

Firstly, thanks for all your continued hard work, it really is appreciated and you’re looking great this year, by the way, your lustrous hipster beard is really on point. Now, you may have received a letter from my parents (one Monger and one Turner) which is fine but if you could go ahead and ignore that one and pay attention to my list that would be great. What I really, really want is:

I bloody love spoons. Plastic spoons, wooden spoons, metal spoons, spoons with holes, spoons that look likes knives because they are knives. I need one at most times of day whether I’m eating or not just in case some food should rock up for me to eat. Any old spoons will do but they have to be spoons – forks are painful, I learned that the hard way.

2. CDs. My dad has loads of CDs and he’s spent ages putting them in alphabetical order, which is great but he’s done it the wrong way round. I’m currently working my way through the bottom two rows which basically go from Tennis to the Zutons but I feel like I should be starting with A, Abba and Above & Beyond. Now, I’ve been working hard to get these all rearranged but dad has got tired of picking all the CDs up off the floor so I keep getting told off and it would be great if I had my own CDs to work through. I don’t really mind what the music is, Christ knows I don’t know how to play them.

3. Pens. Admittedly, I can barely hold the thing the right way round but they taste soooo good and mum keeps pulling them out of my mouth. I particularly like the ones that go right to the back of my throat so I can ram them in there and then run around with my hands in the air. My folks like that too, they like to run around after me, like it’s a game. None of those sodding Ikea pencils though, they’re too small for my hands so I can only imagine they were designed for the cats or something. 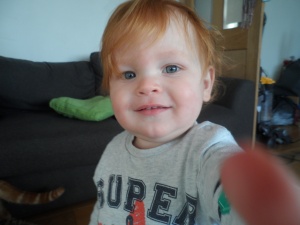 Toast in my right hand, spoon in my left and there’s something just outside the window which is fascinating but…..wait, what’s this? You are eating something. What is it? Scratch that, I don’t care, I want it. Yes, I’m going to stare at you until you give me some. Yes, I might dribble it down my chin and blow a raspberry full of disdain if I don’t like it. No, I don’t care if you’ve been at work all day and you have eaten since breakfast. I want whatever you’re eating, OK? Oh, it’s cheese? Then I want all of it. Now

5. My dirty nappies. As I understand it, you take a part of me, wrap it up in a nice, neat, round package and then throw it as far away from you as the house will allow – understandable as you seem hell bent on taking the smelliest part of me each time. So why is it that when I pick up the same neat, round package and throw it across the room you all seem so put out. I created the brown stickiness so why shouldn’t I get to keep it and throw it around to enjoy it’s satisfyingly solid thunk when it hits the floor? Seriously, if I don’t get my way I’ll be coming in to your room when you aren’t expecting it to rip your pants up, ball up your poo in them throw them down the stairs, capiche?

6. The wrapping paper and boxes, obviously. 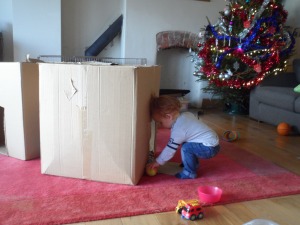 Living in a box…

I hope this would go without saying but if you could make sure there is plenty of wrapping paper (not the foil stuff, that doesn’t dissolve in my mouth as well as the paper stuff) that would be great. Go easy on the sellotape though, that just wastes everyone’s time. As for the boxes, if I could have at least one that is big enough to actually get inside that would be ideal but failing that then one that I can wear as a helmet that would acceptable. Talking of which…

7. Soft things to throw myself at head first. Although getting up slowly and carefully is totally my bag, I do like to put my hands in the air and fling myself at things when I have had enough of this standing and walking lark. The sofa, the floor, a bean bag, my dad’s recent gall bladder scar, a door – you name it, I’ll throw myself at it. I just can’t be bothered with all this careful lowering of myself so it’s great that there are some soft things around but I could do with some more, ta. The old folks don’t like it when I pull all the cushions on to the floor you see, don’t know why.

There are three of the furry little beasts in my house and they are all smaller than me which is a novelty round here, believe me. The trouble is, whenever I spot them and want to play they seem to just skip off faster than I can follow. I don’t think they’re shocked because I give them plenty of warning by screaming from the other side of the room before running over to them but they’ve got four legs compared to my two so they’re bound to be quicker, right? So, yeah, if you could tie them down or add some weights to slow them down I’d really appreciate it.

It used to be so easy. Crawl over to mum, scream in her face and then clamp on to one of her boobs, simple. I even had a choice of dispensers! Now, though, well everything has changed. They keep the milk locked away in a huge metal box that, try as I might, I cannot even begin to open – even crying at it doesn’t work. Then, when they decide that I’ve been good enough to actually have some milk it comes in a plastic cup that is suspiciously tinged in orange because of the other, slightly less huge metal box that they put it in with all the other dirty things. Oh, and if I decide to share my milk (MY milk) with the floor, the sofa, my crotch or the cats this is somehow bad!? It’s my bloody milk and it’s bad enough that they ration it! So, if you could see yourself clear to sorting me out with a secret stash that would be grand.

10. To be bigger. Apart from the aforementioned cats, everyone in this house is bigger than me. It’s cool sometimes; I get picked up, carried around, thrown in the air until I’m sick with glee and confusion. But then there are times when the parental unit put things on shelves that they know I want but are just out of my reach. They know I can’t jump and my climbing skills are still being honed on the stairs so this seems particularly cruel. Also, if I was just a few inches taller I would be able to headbutt my dad in the crotch like I do to my brothers on a regular basis which seems to get everyone laughing… and I’m all about the laughs.

I know a lot of things on this list are a bit intangible and will be hard to arrange but I’m really more interested in these ten things than any cartoony animal toys, fresh pairs of socks or jungle themed bedding. Thanks big man, you’re a legend.